It is Melasti, a time of ritual purification in the lead up to Nyepi, the Balinese New Year,  and as we drive north through the  hills we pass convoys of trucks heading south. Crammed on board are entire villages, gamelan orchestras and temple effigies being carted to the ocean for a symbolic cleansing of body and soul. Along the route I catch glimpses of Ogoh Ogohs, scary monsters with bulging eyes and crazy hair glaring out from community halls; on Nyepi eve they will be paraded and symbolically burned in a bid to cast out evil from the island. This is Bali at its rawest and most primeval, the balance between good and evil maintained by the practice of ancient rites and rituals. But modern problems call for more modern solutions; and no amount of prayer or sacrifice will lighten the shadow cast by AIDS on the unwary, unaware island.

Prevention through education is the only answer and I  attend an  Ayo! Kita Bicara HIV/AIDS (Lets talk about HIV/AIDS) workshop in Tegallalang with I Made Gunarta (Kadek,) co founder of Bali Spirit festival. We chat as we drive slowly through the hills of Gianyar, he tells me “Right now people don’t want to talk about AIDS, they are still in denial,” and adds that, “The Balinese are very open minded, but tend to direct this inwards rather than outwards, it is a  culture that has always encouraged listening, but not so much questioning.”  The concepts of destiny and karma are also at play; AIDS  is often seen as a  shame that has to be borne by the family. “But things are slowly starting to change,” he says.

It is believed that the number of people in Bali who are infected with HIV/AIDS  will reach over 7000 in 2011. However true numbers are hard to determine as the stigma associated with the disease causes many cases to go unreported and untreated. The Chairman of the Committee for Combating AIDS, Nyoman Mangku Karmaya, has claimed that “The threat of drowning in Bali is not only posed by tsunamis composed of sea water, but also by an increasingly growing tsunami of HIV/AIDS sufferers threatening to drown and overwhelm the island.”

As a percentage of the population, figures are still low, but  Indonesia has the fastest growing epidemic of HIV/AIDS in Asia, with an estimated  314,000 people infected, a  figure set to double by 2014  if approaches to HIV prevention are not improved. An extensive sex industry; limited testing and treatment clinics; and a general lack of awareness about the disease are cited as the main factors. Many people are simply not aware that using condoms can prevent infection. The Ayo! Kita Bicara HIV/AIDS program was launched by the founders of Bali Spirit Festival to promote communication about the disease, specifically targeting Balinese women and youth.  The program partners with a number of foundations and  NGO’s already working within the community, such as  Spirit Paramacitta Foundation, Kerti Praja Foundation, and dan KISARA Foundation.

The “EduSpirit” workshops, feature a uniquely Balinese approach that  combines  education, entertainment and spirituality. The aim is to increase awareness and knowledge, but also to develop compassion toward people with AIDS.  Teenagers are promoted as ‘Agents of Change,’ encouraging a ripple on effect through the community, to bring the issue out into the open.  We arrive in Tegellalang where a group of kids from the local school quietly sit waiting. The workshop is run by Wiwie, (Marketing & Communication Executive Officer of Bali Spirit Festival) and a group of young volunteers, mostly from the KISARA foundation. Their enthusiasm is inspiring, and the kids who are initially shy and a little embarrassed soon relax and throw themselves into singing and  teambuilding exercises. Wiwie tells me that they use a gentle approach to break down myths associated with HIV/AIDS. A visual presentation shows that it’s not just sex workers that are susceptible to the disease, but the whole community. Anyone, anywhere, anytime…….. The kids are then divided into small groups to make a presentation that encourages the promotion of empathy and understanding about how the disease affects individuals and their families. The workshop ends with a yoga session. After, I chat with some of the kids, most of them already knew a little about AIDS, but thought that it only affected prostitutes and drug users; they all express that it was good to learn more.

Currently 25 workshops are planned in various locations around the island, but it is hoped that enough funds can be gathered to conduct 100 workshops over the next year. An  impressive  $14,000 was raised  on March 19 as Bali Spirit partner,  Desa Seni, staged the island’s first Yogathon. The resort took on a festival like atmosphere as more  than 200 people stretched, danced, drummed and  chanted  over 12 hours to raise money and awareness for the cause. In between classes people lazed under palm trees around the pool, enjoying the live music and the complimentary food provided by the resort. This year Desa Seni joined forces with Bali Spirit Festival as a gold sponsor and the yogathon proved an inspiring appetizer for things to come. Tom Talucci, co founder of Desa Seni was thrilled with the success of the event which far exceeded their target of $10,000, and commented,  “When people come together in force its amazing what we can do.

Funds for ongoing workshops are also raised through donations, as well as a percentage of ticket sales from the festival itself. Bali Spirit is now well on its way to becoming the most famous holistic event in Asia, attracting world renowned yogis, performers and musicians. The annual event was born out of a vision to build and support community within the context of global music, yoga and dance. But  according to festival founders, “The greatest accomplishment is the ongoing outreach and education programs funded and fueled by the festival,” with over US $34,000 being donated to local charities.

Two years ago I met with festival co founder (and wife of Kadek,) Megan Pappenheim to talk about community outreach. She spoke of her concerns that there were parts of Bali that were being devastated by AIDS, but nobody knew about it because nobody was talking about it. It was  her  intention to  find a condom company to sponsor the festival, and to channel funds into AIDS awareness. True to her word, Fiesta Condoms were signed up as a major sponsor, and have become a highly visible presence at the festival, with an  information pavilion staffed by the lovely  ‘Fiesta girls’ handing out free condoms and Fiesta fans to the crowds.  Ayo! Kita Bicara HIV/AIDS was officially launched in March with a free rock concert in Ubud attended by over 3000 people, the majority of whom were Balinese youth. Information brochures and condoms were handed out, and the crowd was treated to some great music from Indonesian artists KIS, Ray D’Sky  and African legend Afro Moses (who headlined the festival last year.) Festival outreach staff were approached by a number of teenagers to find out how their schools could become involved in the program.  “We’re surprised and delighted at the extraordinarily high turnout for this community event,” said Megan,  “Tonight, Balinese people showed they can have fun and care about a very important cause.” 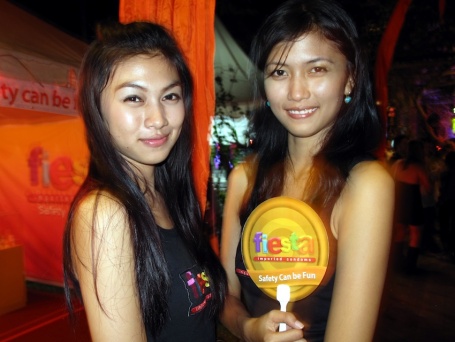 HIV/AIDS was first recorded in Bali in 2000, among intravenous drug users, with an estimated 40-60% of known addicts testing HIV positive. However, a survey conducted six years later showed that the rate of new infections had been substantially curved through methadone treatment and free needle-exchange-programs. The recent surge in new infections is linked to the Island’s commercial sex workers, and the family members of their clients.  It is estimated that in some parts of Bali up to 20% of sex workers are HIV positive, but despite active education campaigns, only 30% of clients use prophylactics.  When you consider that approximately 8000 commercial sex workers are servicing around 90,000 clients, 60% of whom are married with children, the picture is worrying.

I chat with Ayu, of Yayasan Kerti Praja, who have a booth at the festival, she tells me that they run the Amarta Clinic in Denpasar, offering  free STD testing, as well as  medical care and psychological support for AIDS patients. The foundation mostly works with women who have been effected by the disease, either by their husbands, or by their profession. Their mobile units visit bars and kafes offering free screening, as well as  conducting focus groups with commercial sex workers, many of who are still not aware of the dangers posed by unprotected sex, (which I learn can be  had for as cheaply as RP 20,000 in roadside brothels.) The part time sex workers – girls who operate independently out of clubs are harder to reach, as they tend deny being ‘professionals’, tending to seek longer term ‘boyfriend’ clients. She tells me that there is still a mistaken, but widely held belief that you  don’t need to use a condom if you love someone;  and that if someone appears ‘clean’ they are safe.

Kerti Praja also run a project entitled  ReLife, the positive craft, which  provides incomes for families effected by HIV/AIDS, due to husbands who have died or are too sick to work, and also former sex workers who are seeking an alternative form of income. Relife products are made from non recyclable plastic waste collected and cleaned by the women which is then turned into a range of bags, purses and wallets.

AIDS is a problem that is not simply going to disappear, but it is preventable, people just need to know how. So talk about it, especially with Indonesian friends who may not have access to this information. Anyone wishing to learn more, or to  donate money, resources or time to Ayo! Kita Bicara HIV/AIDS can contact Wiwie at admin@balispiritfestival.com